India may see a major shift in its nuclear weapons doctrine by doing away with a ‘no first use policy‘ in the future, Defence Minister Rajnath Singh  said on 16 August 2019: “Till today, our nuclear policy is ‘No First Use’. What happens in future depends on the circumstances,” media reports said quoting the minister who was at an event in Pokhran, the site of India’s nuclear tests in 1998.

The comments come in the midst of heightened tensions between India and Pakistan after the Indian government revoked Article 370 that gave special status to Jammu and Kashmir. Pakistan had condemned the move. In February this year, India had called Pakistan’s “nuclear bluff” by conducting a failed aerial raid on an imaginary terrorist training camp in Pakistan after the 14 February Pulwama suicide attack. It was a failure, there was no terrorist training camp and the bombs damaged some trees. Later in reprisal Pakistan Air Force shot down two Indian aircraft and captured a pilot alive, who was returned as a gesture of goodwill.

In a tweet, Rajnath Singh added, “Pokhran is the area which witnessed Atal Ji’s firm resolve to make India a nuclear power and yet remain firmly committed to the doctrine of ‘No First Use’. India has strictly adhered to this doctrine. What happens in future depends on the circumstances.”

The defence minister was in Pokhran on Friday morning to pay respects to former prime minister Atal Bihari Vajpayee on his first death anniversary. It was during Vajpayee’s tenure as prime minister that India conducted five nuclear tests and became a nuclear weapon state in 1998. Pakistan, in response, had conducted six tests – breaking out of the nuclear closet. India had brought out its nuclear doctrine in 1999 in which it had declared a ‘no first use policy’ i.e. it would not be the first to launch a nuclear weapon but retained the right to retaliate in response to an atomic strike.

In 2016, the then defence minister Manohar Parrikar had set off questions about whether the National Democratic Alliance (NDA) government was doing a rethink on its nuclear doctrine when he had asked why should India bind itself to a no first use policy. Keep reading ….. [……..]

India has built its own “triad” of land, sea and air forces:

All equipped with nuclear weapons. The first leg to develop was likely tactical nuclear devices for strike aircraft of the Indian Air Force. Today, India possesses more than two hundred Su-30MK1 twin-engine fighters, sixty-nine MiG-29s and fifty-one Mirage 2000 fighters. It is likely at least some of these aircraft have been modified and trained to carry nuclear gravity bombs to their targets. India’s nuclear buildup has been relatively responsible, and the country’s No First Use policy should act to slow escalation of any conventional conflict into a nuclear one. As long as India’s nuclear deterrent remains credible, it should cause rational adversaries to think twice before edging to the nuclear threshold. Still, the country’s volatile relationship with Pakistan, which has no such policy, as well as its “Cold Start” blitzkrieg plan of action against its neighbor, means nuclear war cannot be ruled out. …..>>>>>>>

People and Power investigates whether India is about to escalate its nuclear arms race with rivals Pakistan and China….[…….]

At the 2017 Carnegie International Nuclear Policy Conference in Washington D.C., Prof. Vipin Narang, an expert on South Asian nuclear strategy at the Massachusetts Institute of Technology, created waves with his statement that India may abandon its no first use policy and launch a preemptive counterforce strike against Pakistan if it believed that Pakistan was going to use nuclear weapons (likely tactical nuclear weapons) against it. His assessment is based on the statements and writings of former Indian government and military officials. This assessment was recently picked up in Ajai Shukla’s well-regarded column on strategic affairs in India’s Business Standard.

Everybody thinks they know the likeliest pathway to nuclear first use in South Asia. It is called a conventional wisdom for a reason. It starts with a terrorist attack presumed to be from Pakistan on an Indian metropole that kills scores of civilians. Unable to exercise restraint anymore due to domestic political pressures baying for blood, the Government of India orders the mobilization of its three main strike corps and commences offensive operations across the international border, not limiting its response to the Jammu and Kashmir sector and the Line of Control. The deepest thrust is undertaken by XXI Corps and its supporting elements in the desert sector. XXI Corps threatens to bisect Pakistan’s north- south communications, putting Pakistani conventional forces on its heels. Unable to slow down XXI Corps, Pakistan flushes out Nasr tactical nuclear weapons batteries or Abdali missiles and its Strategic Plans Division (SPD) authorizes their use either in demonstration shots, against concentrated XXI Corps armored divisions, or bridgeheads and logistics behind the main thrust to slow down the Indian offensive. India then promises what most presume is massive countervalue retaliation against Pakistani cities, leaving aside how credible or incredible that might be.

This is how nuclear first use would unfold in South Asia, right? Well, maybe not so fast. There is increasing evidence that India will not allow Pakistan to go first.

Nuclear deterrence may have limited military crises and inhibited major wars in South Asia, but with the tyranny of modernisation, one mistake risks the annihilation of South Asian civilisation. Unless its leaders find the courage to resist, the tyranny of geopolitics may trap the South Asian civilisation in a primitive ideological contest. For India and Pakistan, the best way to prevent an arms race and ensure strategic stability is to negotiate a strategic restraint arrangement for South Asia. Keep reading >>>> 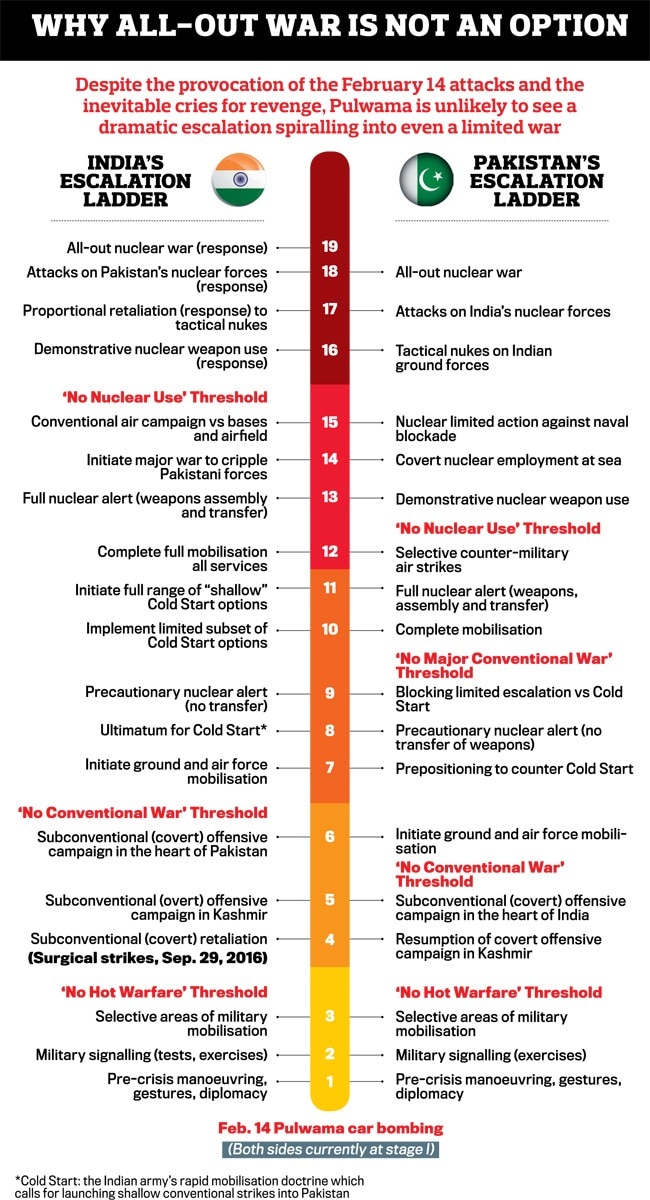 The Nuclear doctrine of Pakistan is a theoretical concept of military strategy that promotes deterrence by guaranteeing an immediate “massive retaliation” to an aggressive attack against the state.

Pakistan had warned that if Pakistan is ever invaded or attacked, it will use “any weapon in its arsenal” to defend itself.

The doctrine is divided into four different thresholds before the weapons would become operationally activated during a conventional or nuclear war with an aggressor state.

In the event of war, for instance war between India and Pakistan, the Indian Armed Forces’ numerical superiority and large stock of conventional weaponry is most likely to overwhelm Pakistan.

Therefore, in a deteriorating situation, where an Indian military aggression is more likely to penetrate through Pakistan’s defenses (or has already breached the main defense line causing a major setback to overall defense) which cannot be reversed by conventional means, the government would be left with no other option except to use nuclear weapons to stabilize the situation, with a first strike.

The rationale behind the doctrine is to prevent India from any military intervention (both conventional and surgical) that would lead to the disintegration of the country, as it did in 1971.

According to sources, the doctrine entails a stage-by-stage level of advancement in which the nuclear threat is increased at each step to deter India (or any aggressor state) from attacking:

A public or private warning.
A demonstration atomic test of a small atomic device on its own soil.

The use of (a) nuclear weapon(s) on Pakistan’s soil against foreign attacking forces.

The use of (a) nuclear weapon(s) against critical but purely military targets on foreign soil, probably in thinly populated areas in the desert or semi-desert, causing the least collateral damage. This is possibly to prevent a retaliation against Pakistani cities.

A doctrine could be defined as a set of principles formulated and applied for a specific purpose, working towards a desired goal or aim. These principles could of course be advocated and taught as the right belief or dogma acceptable to a majority of the people concerned. A nuclear doctrine would consequently consist of a set of principles, rules and instructions for the employment or non-employment of nuclear weapons and other systems associated with those weapons.

Before we discuss the nuclear doctrine of Pakistan it would be appropriate to dilate somewhat on the factors that have conceived the concept which has formulated the nuclear doctrine. Pakistan’s main concern has been with her security and territorial integrity which has been threatened and violated by India many times since 1947 when both countries became independent. Pakistan has fought three wars and two border conflicts short of war with India. In 1971 Pakistan was dismembered by Indian military intervention. Today troops of both countries are in an eyeball-to-eyeball deployment on either side of the Line of Control in Kashmir and along the Siachin Glacier in the northern areas. These facts have a great bearing on Pakistan’s concern for a viable security parameter.
Keep reading …..
http://www.defencejournal.com/apr99/pak-nuclear-doctrine.htm

India’s classic war plan against Pakistan centered on large-scale, time-consuming mobilizations along two main fighting corridors. This plan didn’t help India after the “Twin Peaks” crisis, sparked by a brazen attack on the Indian parliament in 2001. India carried out a massive mobilization, but Pakistan’s army deployed faster after a delayed start, which made the prospect of a full-scale conventional war under the shadow of nuclear weapons a poor choice for New Delhi.

War plans don’t go away; they evolve. India’s army then pivoted to plans for quick strikes and shallow advances along many possible avenues of attack. Rawalpindi countered by embracing nuclear weapons tailored for various kinds of battlefield use. The Indian Army’s so-called “Cold Start” doctrine remains on the books, even though implementation is problematic due to long-standing disconnects in civil-military relations, joint-military operations and military procurement. More importantly, a limited conventional war, no matter how carefully planned, may not stay limited. India’s civilian leaders have yet to endorse the army’s plans, and didn’t employ them after the 2008 Mumbai attacks.

Relations between India and Pakistan are now stuck in a bad place and have poor prospects of improvement in the near term. Bilateral diplomacy is limping along, the Kashmir Valley is seething due to ham-fisted governance and a lockdown by Indian security forces, and artillery fire can again be heard across the Kashmir divide.